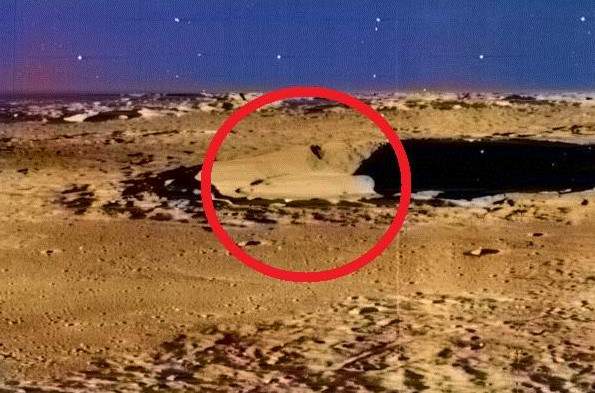 A new video has popped up on the Internet sparking conspiracy that there is an alien life on the lunar surface. The YouTube channel named StreetCap1 which is notoriously known for uploading images and videos showing anomalies in the lunar surface has uploaded a new video that shows a saucer-like structure inside a crater on the moon. According to the UFOlogist and conspiracy theorist, George Graham, the image shot by Lunar Orbiter-3 shows a saucer-shaped structure inside a crater in the background which has sparked a row of claims regarding the anomaly and what it could be.

Since StreetCap1 has a high subscriber base and his videos has been viewed millions of times collectively, this new video titled “Huge Spacecraft in Lunar Orbiter 3 Photograph” racked up hits and soon become viral over the internet with thousands of people watching and sharing it across various social media platforms. Following the release of the video, it received a number of comments with users trying to explain what the structure could be and that is where the news of this saucer-shaped structure with perfectly smooth edges and Windows-shaped structure inside it, people soon connected it with the space shuttle which has a similar shape. While others claim that it could be an alien ship residing in the crater when it was photographed by the Lunar Orbiter 3.

A user stated that NASA has been covering any signs of extraterrestrial life for years and it won’t provide a satisfactory explanation of such sightings. Many conspiracy theorists believe that NASA already knows that aliens do exist, however, the news is still under wrap and hasn’t been publicly announced yet. There are speculations on the moon landings that it could be fake. On the other hand, speculations are that the reason why NASA hasn’t sent any manned mission to the moon after the end of Apollo and Gemini missions is that they were warned by aliens not to come back. NASA advocated itself many times that there is nothing like alien life and at least nothing that has been detected and discovered yet.

According to a YouTube user named Silverbackplays, some billionaire must invest a hefty amount of his net worth to send a public lunar orbiter to the moon in order to photograph the surface and use modern imaging techniques. However, he added that the mission must not be controlled by any governments or agencies which are indirectly controlled by governments that would help to discover traces of alien life if it exists.

The image featured in the video is not new since it was released by NASA on its website back in 1967 when Lunar Orbiter 3 was sent on the lunar surface to photograph it and to allow the researchers zero in the perfect landing sites for its Apollo, Surveyor, and other missions. George Graham searched for the images and came across this image which shows an anomaly in the background which has been masked as a saucer-shaped structure or even a space shuttle.

But it is not the first time George has uploaded such a video sparking conspiracy in the public, in fact, his channel is one of the many which have dozens of videos, thousands of subscribers and millions of hits where people watch videos which shows anomaly on the lunar surface and in the space as well. A few days ago, StreetCap1 uploaded a video which shows two UFOs hurtling past the moon captured by China’s lunar probe Chang’e 3. He was also one of many conspiracy theorists to claim that moon landing was a hoax and was fabricated after a set was created mimicking the surface of the moon.