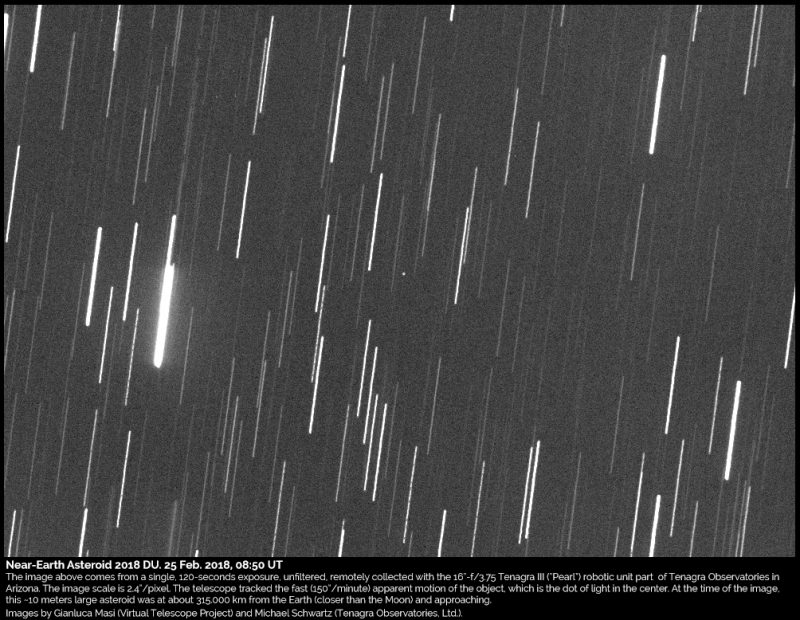 A big asteroid just skimmed past Earth in a close distance. On February 25, the huge asteroid made a close flyby of Earth 8:22 UTC [12:22 p.m. CST. The name of the huge near-Earth asteroid is 2018 DU and during its closest approach, it was almost 175,000 miles (284,000 km) from Earth. This distance is almost half of the distance between Earth and the moon. The 2018 DU asteroid is almost 10 meters wide and was detected through the Virtual Telescope Project.

NASA confirmed that there is no threat to Earth from the 2018 DU asteroid and the near-Earth asteroid would safely fly past Earth irrespective of its close distance. Giving more information about the asteroid, the VTP website said, “The telescope tracked the apparent motion of the asteroid, this is why stars leave long trails, while the asteroid looks like a sharp dot of light in the center of the image.”

The VTP website had earlier mentioned on its website that at the imaging time, asteroid 2018 DU was at about 315.000 km from the Earth, closer than our Moon, and it was approaching us. The VTP had predicted that the ~10 meters large asteroid will reach its minimum distance (284.000 km) from us on 25 Feb. 2018, at 18:22 UTC. On February 25, asteroid 2018 DU zoomed past Earth safely in an extremely close flyby. Scientists associated with the VTP at Tenagra Observatories in Arizona captured a 120-seconds exposure image that got hold of this big near-Earth asteroid. The 120-seconds exposure image also captured other celestial bodies other than the 2018 DU.

Two scientists named Michael Schwartz of Tenagra Observatories and Gianluca Masi of Virtual Telescope Project discovered the near-Earth asteroid that was approaching Earth. NASA classified this 2018 DU as a near-earth asteroid due to its extremely close distance from Earth. A near-Earth object or NEO is any solar-system body whose orbit makes it come in close proximity to Earth.

According to NASA, a solar system body is classified as an NEO if its perihelion or closest approach to Sun is less than 1.3 astronomical units. Also, if the NEO comes close to Earth and is larger than 140 across then it is termed as Potentially Hazardous Asteroid or (PHO). Most of the NEOs and PHOs are asteroids. The near-Earth asteroids and the near-earth comets come under NEOs. At present, there are more than seventeen thousand near-Earth asteroids and more than one hundred near-Earth comets revolving in space. The close flyby of 2018 DU marked the 17th time an NEO passed between Earth and Moon this year.

Near-Earth objects (NEOs) are small Solar System bodies with orbits around the Sun that lie partly between 0.983 and 1.3  astronomical units (AU; Sun–Earth distance) away from the Sun. Thus, NEOs aren’t objects that are currently near the Earth, but objects which can potentially approach the Earth at a relatively close distance.

When a NEO is detected, like all other small Solar System bodies, it is submitted to the International Astronomical Union’s (IAU’s) Minor Planet Center (MPC) for cataloging. MPC maintains separate lists of confirmed NEOs and potential NEOs. Some NEOs‘ orbits intersect that of Earth’s so they pose a collision danger. These are considered Potentially hazardous objects (PHOs). For the asteroids among PHOs, the potentially hazardous asteroids (PHAs), MPC maintains a separate list.

PHAs are currently defined based on parameters that measure the object’s potential to make threatening close approaches to the Earth. Mostly objects with an Earth minimum orbit intersection distance (MOID) of 0.05 AU or less and an absolute magnitude of 22.0 or brighter (a rough indicator of large size) are considered PHAs. Objects that cannot approach closer to the Earth (i.e. MOID) than 0.05 AU(7,500,000 km; 4,600,000 mi), or are smaller than about 140 m (460 ft) in diameter (i.e. H = 22.0 with assumed albedo of 14%), are not considered PHAs. NASA’s catalog for near-Earth objects also includes the approach distances of asteroids and comets measured in lunar distances, and this usage has become a common unit of measure used by the news media in discussing these objects.