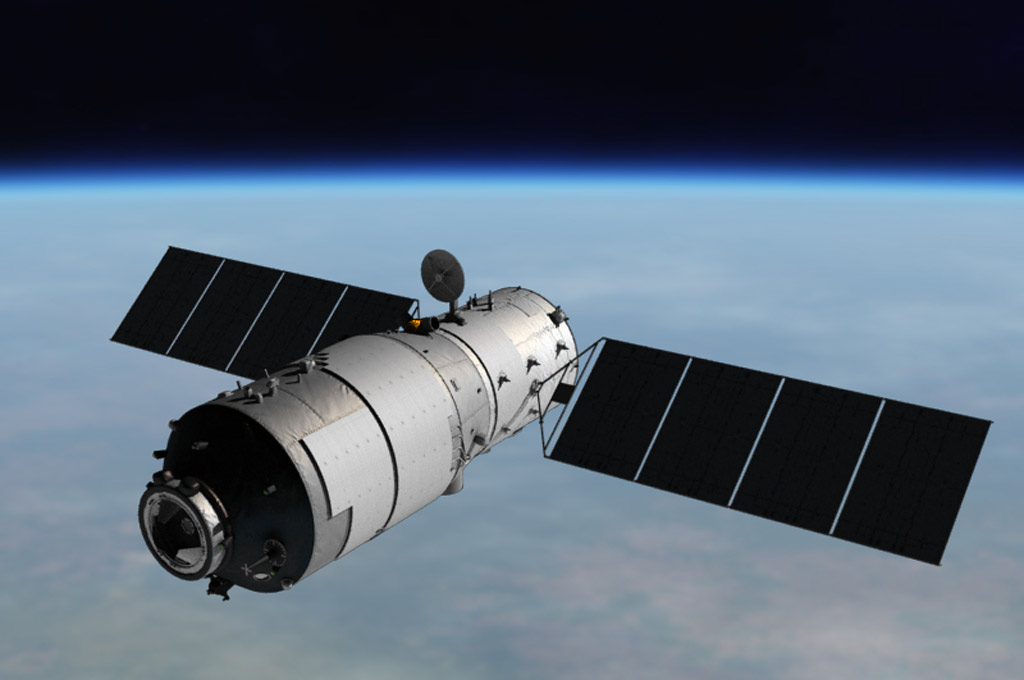 Out of control, Chinese satellite Tiangong-1 is about to crash on Earth soon at an unknown place, revealed European Space Agency (ESA). Scientists are tracking the movement of the satellite weighing 19,000 pounds that will meet its doom within the first week of April. Moving at a speed of 17,500 miles per hour, the space station will turn into a fireball soon after entering the atmosphere of Earth, however, experts are still not sure whether the satellite will hit earth’s surface or will get vanished in the atmosphere itself.

The space agency said that it cannot precisely predict the exact location of the crash of the Chinese space module. It said that exactly when and where the Tiangong-1 will burn up is currently difficult figure out accurately and it is also unaware of how much of the broken pieces will reach the Earth’s surface. The ESA scientists say that the exact estimations of Tiangong’s re-entry are difficult to attain owing to the complexities of modeling the atmosphere, the dynamics of the uncontrolled reentering object and the limitations in observing the space module.

According to USSTRATCOM’s Joint Space Operations Center, the out-of-control Tiangong-1 is currently orbiting with a perigee of 235 km and apogee of 257 km. Perigee is the closest point to the Earth during an orbit and apogee is the farthest point from Earth during an orbit. The scientists say that the space station is decaying in an accelerated manner due to the atmospheric drag. The more Tiangong-1 will approach lower altitude, the more it will get decayed.

Now the big question is where exactly the spacecraft will crash. No exact information on it has been given yet. Ailor, from the nonprofit Aerospace Corporation, said, the company will not forecast anything in it until five days before the space station is expected to break apart. Is it also said that, when it will happen, the parts of this big spacecraft like titanium scaffolding and glass fiber wrapped fuel tanks can hit the ground at a speed of more than 180 miles per hour. After losing its control over the space station, China is now not in a stage to tell whether the spacecraft will disintegrate over the Point Nemo, the Pacific Ocean.

As per the reports, the Tiangong-1 will most probably reenter Earth somewhere between 43 degrees north and 43 degrees south latitudes. In the map, these two points indicate the central United States down to the southern point of Australia. Jay Melosh, a professor of earth, atmospheric and planetary sciences at Purdue University said that the chances of space station crashing at either extreme is quite high. Melosh told that Tiangong-1 is like a pendulum and the space station spends more time at the limits of its swings that when it is moving at high speeds. Launched in 2011, the Tiangong-1 lost its connection with the Chinses space agency in September 2016 and since then it is orbiting Earth.

Tracking Tiangong is tough for scientists as space is cluttered with over 170 million pieces of space debris that are in circulation. Most of them are very small in size and only 29,000 of those are larger than about 4 inches. Although the size might be small but moving at speed of thousands of miles per hour, these objects can pose serious threat to satellites orbiting Earth. For example, a collision with a (4-inch) object would entail a catastrophic fragmentation of a typical satellite,” according to the European Space Agency. Smaller pieces could still destroy spacecraft systems or penetrate shields, possibly making bigger satellites such as Tiangong-1 unresponsive and turning them into massive pieces of space debris themselves. Also, if some of these objects change it trajectory towards then they can cause havoc on Earth and might disrupt lifestyle.

In order show how much space pollution we humans have created, Stuart Grey, a scientist and lecturer at the University College London, has made a video which compares the amount of space debris present in 1957 with space chunks in 2015. It was 1957 when Russians launched the Sputnik satellite and released first of the man-made chunk in space. Since then there has been tremendous increase in the numbers and now these numbers have grown so much that they are threatening space projects and more importantly mankind itself.

Every white dot in the video represents a space debris released during space missions. Agencies have started proposing ideas to clear up space chunk before things quickly get out of hand. Moreover, reusable rocket can significantly reduce the number as these satellites do not leave chunks behind.

With an aim cleaning the space junk, Japan Aerospace Exploration Agency (JAXA) had designed a space junk collector, but the mission failed miserably. As per the announcement made JAXA, the tentative mission for cleaning ‘space junk’ or debris from the lower orbit of the earth ended up in a large disappointment. Earlier, JAXA already had confirmed regarding the malfunction in its space junk collector and Monday’s announcement marked corroborated failure stamp at the ambiguous mission.

While Japan Aerospace Exploration Agency (JAXA)’s H-II Transfer Vehicle Kounotori 6 (HTV6) succeeded in shipping the supplies to the onboard crews of the International Space Station (ISS), the junk collector failed to meet the goals of eliminating space debris from earth’s orbit. The Japanese space cargo ship took off on 9th December 2016 and ran off from the ISS on 28th January. On Monday, 6th February, the spaceship re-entered into earth’s atmosphere. Following undocking of the spacecraft from the space station, the Japanese scientists projected it to remove some space wreckage from the low-earth orbits with the help of Kounotori Integrated Tether Experiments (KITE), an on-orbit expression of electrodynamic tether on HTV.

Attributable to the unanticipated malfunction in ‘garbage collecting system,’ the collector failed to gather the space junk productively, which triggers the zooming of more than 100 million bits of space junk in the orbital region of Earth. And due to this unexpected break, Japanese scientists were expecting some serious threats to both the earth and ongoing space missions. The whizzing refuse, as expected by experts includes the recycled devices, gathered from the old spaceships and junked pieces of the old missile.