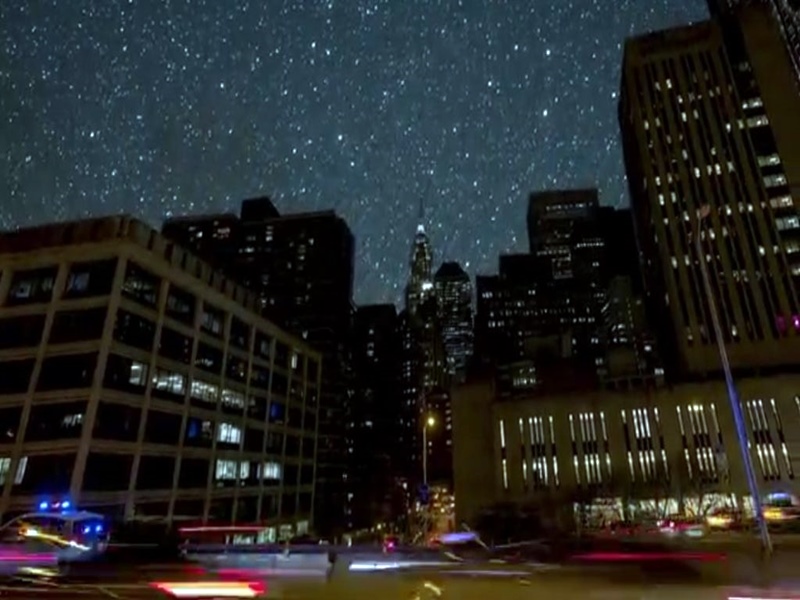 Have you ever imagined how a city would look without much light? The answer is there in a video recently released by Skyglow. Normally, it is quite difficult to detect stars in the dark sky in New York which is largely affected by light pollution. The light pollution has blocked the amazing view of celestial bodies. But the Skyglow project has now given a chance to see the real beauty of dark sky in New York. Well, it is not the real view, but Skyglow has tired its best to give a perspective of New York city which may be never possible in future. The blanket of stars and cosmic phenomena is the kind one will see from the Grand Canyon and Death Valley.

The video was released to promote the Dark Sky Week, which will be observed from 15th April to 21st April. The International Dark-Sky Association conducts the event to educate people about the advantages and disadvantages of light pollution and urges citizens to turn off the lights during the week to reduce light pollution level.  But, it will be quite difficult for those people to turn off lights who are living in the city which is also known as the city that never sleeps. Uses of excess artificial lights like over-illumination, light trespass, etc., cause light pollution. Skyglow just wants to show how a major and hurricane-free city could look if they really did turn out the lights.

A high school student of Midlothian in Virginia, Jennifer Barlow kick-started the National Dark Sky Week and it is observed by the American Astronomical Society, Astronomical League, Sky & Telescope, and Internal Dark-Sky Association. It is always observed in April every year, on the eve of the new moon.

Medical Disposables Market Growth Prospects, Trends and Forecast up to 2024

Computational Biology Market Key Opportunities and Forecast up to 2024

Pharmacy Automation Systems Market Opportunity Assessment and Forecast up to 2025