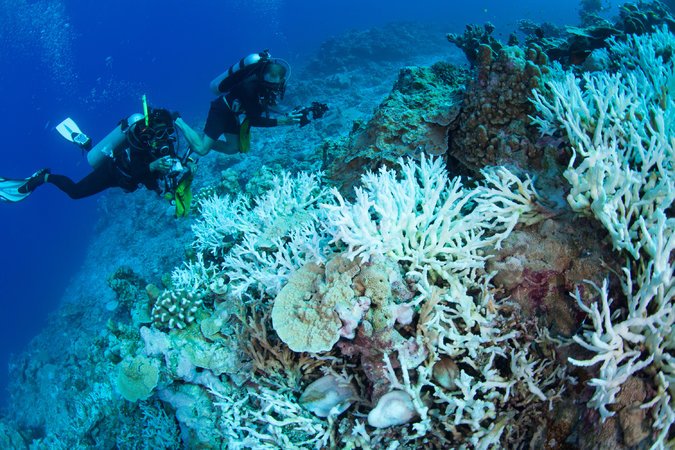 National Oceanic and Atmospheric Administration (NOAA) researchers recently found a “mysterious and secretive garden” of corals in the deepest parts of the Gulf of Mexico during an expedition for investigating uncharted waters and mapping the bottom of the ocean. Researchers were shocked to find the dynamic world alien bamboo corals by utilizing a remote-operated submersible (ROV) more than 7,500 feet down.

Researchers were stunned to find the hidden garden, however, what was all the more surprising is about the life that thrived in the dark abyss tells about the environment. “This is a truly magnificent garden of coral fans, I don’t think we’ve seen these densities yet in the Gulf of Mexico,”
What are exactly bamboo corals?

Bamboo corals (family Isididae) are basically an accumulation of organisms called polyps and they eat by sifting even little organisms like plankton. The skeleton of a bamboo coral looks like a tree with branches which are made of calcium carbonate.

What is the signification of this discovery?

Scientists have a belief that the corals are hundreds or even thousand years old which implies that the pieces they are sitting on are extremely stable as they require the right amount of geology underneath to attach themselves.

Likewise, the corals require access to current not only to position them as needed but also be able to feed. In a video shared by NOAA, the marine invertebrates are seen confronting the current to boost their chances of filtering the other tiny organisms (both deep sea and their shallow-water partners) require enough food to be accessible in their surroundings so that they can live.

The deep ocean is really a treasure for scientists. They frequently come across mind-blowing revelations from the regions, which are hard to investigate. In the end, as per NOAA, it is just five percent of the ocean has been explored by them. Eventually, the time will tell about all the surprises which the deep trenches hold for us.

Girl Scouts who have an enthusiasm for STEM, Opportunity waiting for you in High Rock Tower Observatory
Tourists shamelessly destroy 200-million-year-old dinosaur fossils at Utah Park