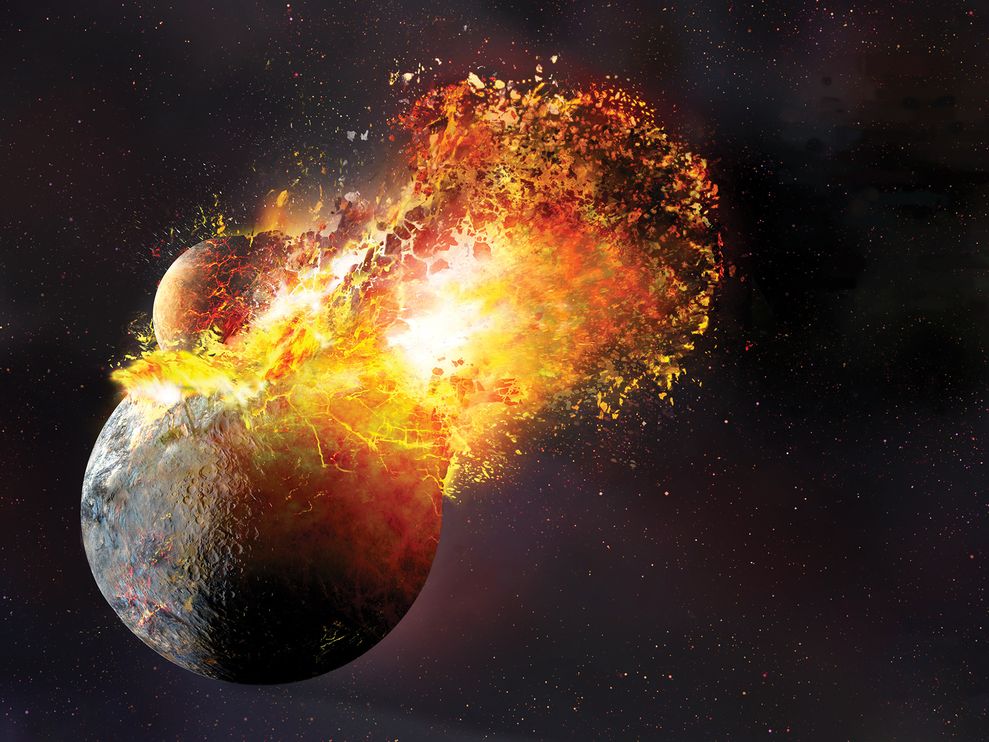 Scientists have hypothesized a new theory regarding the formation of the Moon, our closest cosmic neighbor. According to the new theory, the Moon, our only natural satellite, might have formed inside infant Earth, that means during the early period of Earth. The scientists related to the study say that moon may have formed from Earth before our planet had fully taken its shape.

The new theory is based on theoretical phenomena called synestia in which a planet is formed due to the collision of two planet-sized objects. As per synestia, when two big planet-sized rocks collide, they get converted into a vigorously spinning rock. In this case, the synestia made Earth a quickly spinning formation of rock having a large donut-shaped cloud. This cloud consists of the left over debris and molten rocks formed after the large collision. This large donut-shaped vaporized rock eventually cooled and our earth was formed.

But a chunk of its debris floating in the cloud gathered material and formed the Moon. Hence, the Moon does not have any vaporized elements in its composition. Co-author of the study, Simon Lock a graduate student at Harvard University, said, our model starts with a collision that forms a synestia. The Moon forms inside the vaporized Earth at temperatures of four to six thousand degrees Fahrenheit and pressures of tens of atmospheres,

Previously, a theory named the Giant impact theory tried to explain the formation of Moon. According to the theory, almost 4.5 million years ago, a Mars-sized object crashed with Earth and this collision ejected molten rocks or debris which eventually came together and formed the moon. The theory talked about a lot of unique features of Moon-like its density lower than Earth, small iron core and the lunar terrestrial rocks having the stable-isotope ratios.

Although both the theories hypothesize that moon is formed from the molten materials and debris formed due to the collision of Earth with other space object but the latest synestia theory explains more about the similarities between the composition of the Earth and the Moon. Scientists can now better understand why Moon has a similar composition like Earth but, is not exactly identical to Earth.

Following is an abstract on Origin of Moon from Wikipedia

The origin of the Moon is usually thought to be that a Mars-sized body struck the Earth, making a debris ring that eventually collected into a single natural satellite, the Moon, but there are a number of variations on this giant-impact hypothesis, as well as alternate explanations, and research into how the Moon came to be continues. Other proposed scenarios include captured body, fission, formed together (condensation theory), planetesimal collisions (formed from asteroid-like bodies), and collision theories.

The standard giant-impact hypothesis suggests the Mars-sized body, called Theia, impacted Earth, creating a large debris ring around Earth, which then accreted to form the Moon. This collision also resulted in the 23.5° tilted axis of the earth, thus causing the seasons. The Moon’s oxygen isotopic ratios seem to be essentially identical to Earth’s Oxygen isotopic ratios, which may be measured very precisely, yield a unique and distinct signature for each solar system body. If Theia had been a separate protoplanet, it probably would have had a different oxygen isotopic signature from Earth, as would the ejected mixed material. Also, the Moon’s titanium isotope ratio (50Ti/47Ti) appears so close to the Earth’s (within 4 ppm) that little if any of the colliding body’s mass could likely have been part of the Moon