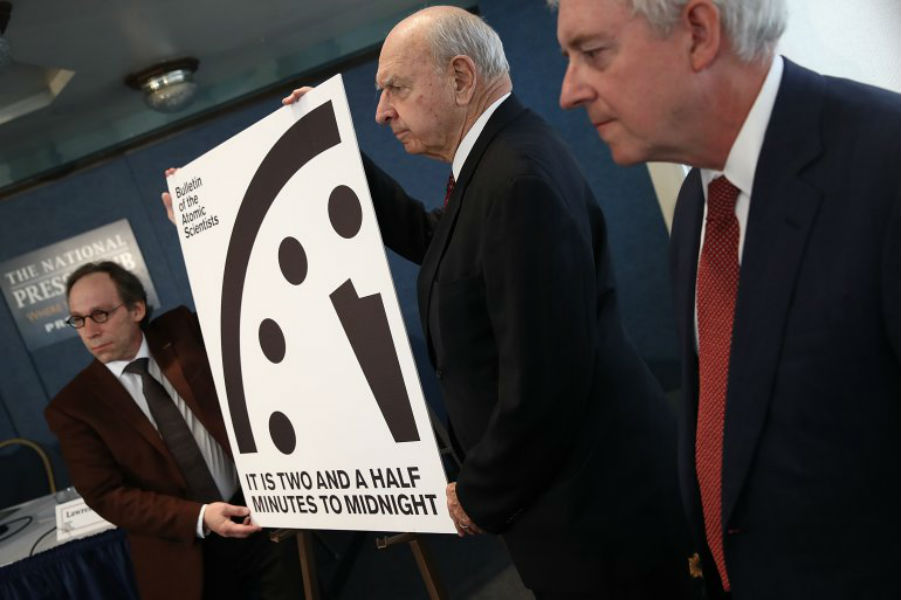 The symbolic Doomsday Clock that stands for a countdown to probable global cataclysm is about to move 30 seconds closer to the midnight from today, warns a team of Doomsday scientists. The progression of Doomsday clock towards the midnight means the advancement of the closeness of humanity to the apocalypse. As cautioned by the scientists, with the closeness of doomsday clock, the humanity has moved one step closer to self-devastation.

The Bulletin of the Atomic Scientists (BPA) has changed the hands of the Doomsday clock from three minutes to two-and-a-half minutes to midnight, symbolizing the neighboring the world to the total destruction since 1953. According to BBC, this is the closest movement of the symbolic clock since 1953, when Russia and the United State started testing hydrogen bombs.

The Doomsday clock, which serves as a symbol of the closeness of humanity to the self-destruction of the planet was last witnessed changes in 2015. In 2015, the clock moved from five to three minutes before midnight and now it is again set to take a leap of 30 seconds closer to midnight. Among the concerns about “a boost in vociferous patriotism worldwide, US’s new president Donald Trump’s remarks about introducing nuclear arms and of course the intensifying climatic problems, the movement of the symbolic clock has marked another concerning bar for the global researchers and scientists.

While representing their annual report regarding the level of safety and danger for the world, the scientists admitted that the changes are being made following the statement of President Trump’s on climate change, and of course his wish to boost the nuclear capabilities of the United State. The clock was launched in 1947 and at that time, was set at seven minutes to midnight by the US scientists. Since then, the clock has been changed 22 times.

As said by the team of researchers, “The movement of the Doomsday clock is symbolizing the darkening global backdrop that is only decorated by increasingly refined technology, and a growing ignorance for scientific expertise.” While America’s new President Donald Trump has called climate change reports and concerns a “Mere Hoax’ and declared to disregard it completely, the report of the closeness of humanity to death might teach him a lesson.

Scientists Soon To Develop Asteroid Deflective Methods for Avoiding Apocalypse
The Launches of Proton-M Rockets Might Get Delayed Down To Extra Technical Checks: Russia