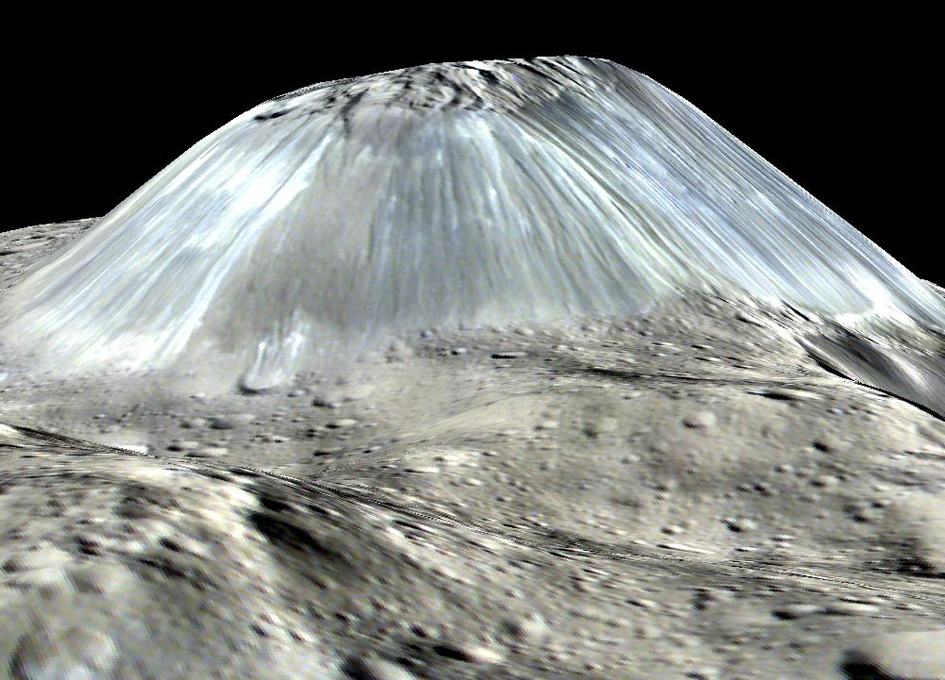 Ceres – the biggest celestial object in the asteroid belt that stuck between the orbits of Mars and Jupiter seems to host some hidden ice volcanoes, suggests a new international study. Earlier in 2015, NASA’s Dawn spacecraft detected a four-kilometer elevated Ahuna Mons cryovolcano on Ceres, following which scientists suspects it to host some more volcanoes. However, a team of scientists, in their recently published research paper has confirmed that the dwarf planet Ceres possibly will host multiple “buried” ice volcanoes.

Like other Arctic planets of our solar system including Pluto, Europa, Triton, Charon, and Titan, Ceres may also accommodate many frozen mountains –made out of the icy rock, called ‘cryovolcanoes.’ Up to date, Ahuna Mons was the only noticeable icy volcano on Ceres. But the assumption of some other icy volcanic structures has now paved new paths for discovering more facts about the extraterrestrial realm and solar system.

In 2015, researchers detected a 2.5-mile-large cryovolcano, or ice-covered volcano on the dwarf planet Ceres. As suggested by Michael Sori, a researcher at Lunar and Planetary Laboratory at the University of Arizona in Tucson, “what’s the most eccentric thins about this finding is the volcano, Ahuna Mons, which is one-of-a-kind.”

But surprisingly, the rest of planet’s surface is horizontal, which is the most baffling point for the scientists. As said by Sori, It is still a matter of question that – “Is Ahuna Mons really the only volcano of Ceres’ surface or is it just the only currently visible one?”

According to the new study, published in ‘Geophysical Research Letters,’ authored by Sori, “Ahuna Mons is not the lone volcano on the dwarf planet; rather, there are some other volcanoes which have been flattened out on the planet over millions of years. There must have lots of cryovolcanoes on the surface of Ceres, but over the years, they have deformed.

The study also highlighted that, at some point in time, many other planets of the solar system used to host volcanoes that vanished due to evolution. But the eccentric thing about Ceres is that it doesn’t contain any atmosphere, and for that reason, it lacks the presence of wind or objects that can wear away a mountain on other planets. This theory thus points towards an alternative explanation, called viscous relaxation. The theory suggests the ice volcanoes evaporate like glaciers on Earth, over the years.