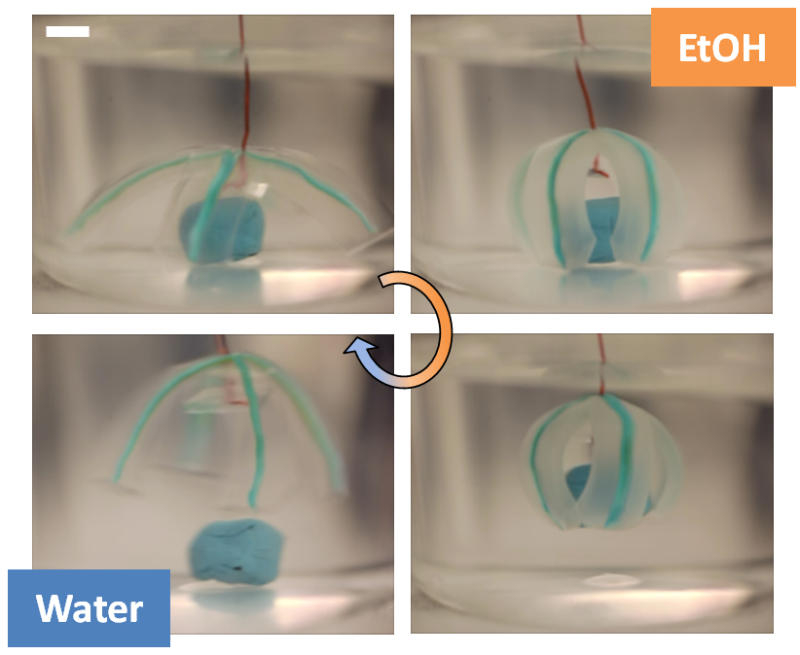 Engineers from the Cambridge-based Massachusetts Institute of Technology (MIT) have come up with a newly developed gel-based robot that is capable of grasping and releasing live fish into the water. A team of MIT engineers has succeeded in fabricating a transparent, hydrogel-based robot that can be in motion when water is impelled in and out of them. The robot is designed to conduct a number of superfast and forceful tasks; including catching and releasing live fishes and kicking a ball at the bottom of the sea.

The drudges are made completely of hydrogel – a rough, chewy, nearly translucent substance that is mostly composed of water. The robot is capable of moving at the bottom of the sea and carrying out some forceful tasks like catching fish, kicking ball, and releasing the live fishes. Each robot of the developed cluster is a throng of unfilled, accurately planned hydrogel formations, associated with some rubbery channels. Once, water pumped into the channel, the robots can float inside the water and conduct the programmed tasks.

While experimenting, the scientists thrust water into the hydrogel-based robots, following which, the structures quickly started inflating in orientations that allow the bots to double up or lie back easily. The researchers formed the hydrogel into structures by drawing on 3D printing and laser cutting. When water is forced into the hydrogel-made limbs, they started stretching or curling, just like the open and close movement of human hands.

Researchers, using the eel-inspired robot, were capable of making the scrabble close up in a superfast manner for grabbing a goldfish without hurting it in the process. While the traditional robotic hands are likely to crash the fishes in the process, the newly developed robot is quite different. Up to now, the engineering team of MIT hasn’t confirmed, if the robot can be used in the real world tasks like fish grabbing process, but soon it is expected to mark its commercial debut.

Xuanhe Zhao, the lead researcher of the study said, “Hydrogel is extremely spongy, drenched, and biocompatible material and can figure more responsive interfaces with the organs of the human being. The development of the new robots from hydrogel can be potentially applied for moderate treatments to tissues and organs in surgical operations.”

The study was sponsored by Office of Naval Research, the MIT Institute for Soldier Nanotechnologies and the National Science Foundation.