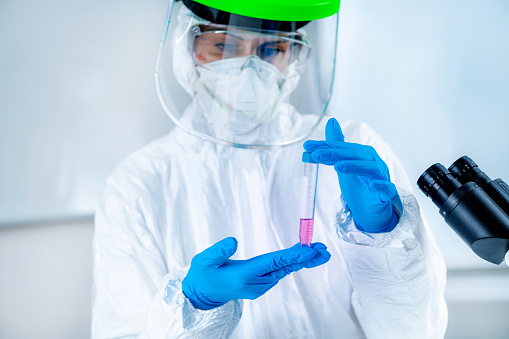 Chinese virologist Dr. Li-Meng Yan claimed the new Coronavirus was created in a government-controlled Wuhan laboratory and believed it had scientific evidence to support that assertion.

The virologist, who for his treatment of the Coronavirus pandemic has become the whistleblower against the Chinese government, was charged in December last year with investigating a cluster of Sars-like cases originating from mainland China.

The senior scientist working in Hong Kong reported that during her research, she uncovered a cover-up operation and that the Chinese government was aware of the virus spread before it was officially recognized.

Dr. Li-Meng, a graduate of the Hong Kong School of Public Health in virology and immunology, was reportedly forced to move to the United States for safety reasons.

On September 11, she participated from a hidden location in an interview on the British talk show “Loose Women,” and spoke about her research into Coronavirus disease and the obstacles she faced.

She had performed two research studies on “new pneumonia” in China between December and early January and the latter in mid-January and shared the findings with her supervisor, who is a World Health Organization (WHO) consultant. She expected her supervisor to do the right thing on behalf of the Chinese government and the WHO, but to her surprise, she was told to keep silent.

At the time of the Chinese New Year, great travel from China to all over the world takes place. But she decided not to remain silent because it is a [highly] contagious virus. She said it was terrifying as she faced threats but she knew she’d regret if I didn’t say the truth to the world.

On January 17, she said she contacted a famous Chinese American YouTuber. The presentation, which was in Chinese, explained that-

And the last thing, the scientist claims, is that “this virus is not from nature. This is focused on the discovery and possession of a bad Coronavirus called CC45 and ZXC41 by the Chinese Military Institute.

A laboratory change on that basis becomes a new virus. Since January, the virologist said she had been working on a research paper, that is, before leaving Hong Kong with a small group of top scientists and publishing the results soon.

She said they’ll make it official. There are two studies, the first will arrive in a few days and the scientific findings will be told to citizens.

She added everybody can check it, identify it, and verify it. We need to know the origins of the virus. Otherwise, it will put everyone’s life in danger.

Vitreous Tamponades Market to Attract a Revenue of US$89.9 Mn by the End of 2025
Traveler’s Diarrhea Treatment Market Insight on the Important Factors and Trends Influencing the Industry